We Got Married… This Is Our Story! 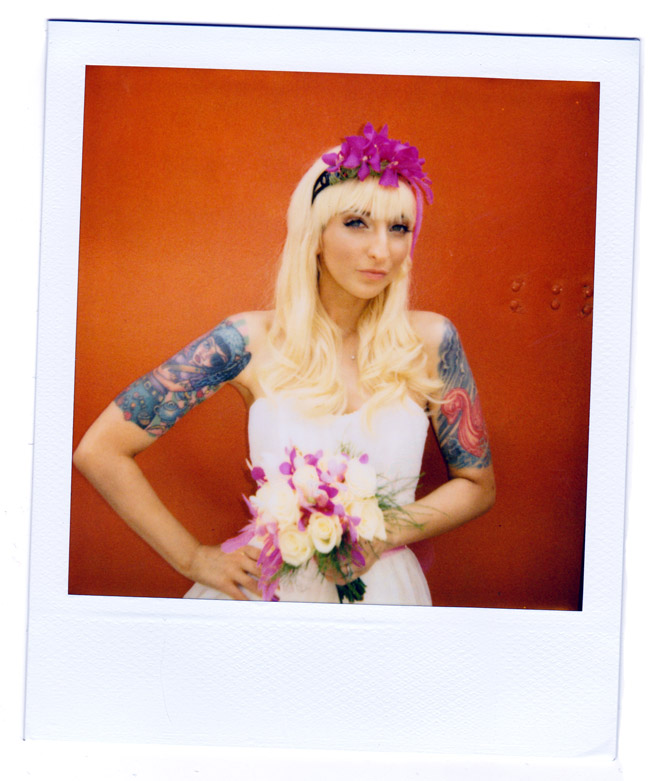 Mike & I had been dating for two years & two months when we got married. We planned our entire wedding in under a month. We didn’t want to have a huge party or spend a lot of money. The idea was for it to be low-key. In fact, when we first started discussing it, it was just going to be Mike & me & my parents at City Hall! We didn’t want to make a huge spectacle, just wanted it to be honest & real.

I don’t really remember when Mike & I starting discussing marriage. All I remember is us eating burgers at our favourite place (Black Iron Burger, holler!) when he told me, “I’ve made my decision… I want to be with you forever.”

It was always about the timing, though. We wanted my parents o be involved, but they live in New Zealand, & they don’t come over to visit too often. The really tricky bit was that Mike & my father hadn’t met, even though they emailed one another all the time, & they’re both quite old-fashioned. Mike wanted to ask my father’s permission, & I knew that my father would want to be asked, but since they had never been in the same place at one time, we weren’t quite sure how to make it all work.

So here’s what happened. My father was going to France to ride the Tour de France route (amazing), & he’d decided to stop by NYC on his way home & spend a week with us. He emailed us an itinerary of the things he wanted to do while he was in the city, & about a month before he was due to arrive in New York, my parents got on a Skype call with Mike & I.

We were talking about things he wanted to do, when Mike & I said to him, “There’s something else we’d like to do while you’re in town,” & he said, “Oh?”

He was totally shocked & surprised, but he was thrilled! My mother booked a flight to NYC, & Mike & I went ring shopping the very next day. He proposed to me that night, & we started to plan our wedding. Efficiency ++ !

Weddings are strange… I never grew up dreaming of the white dress or the elaborate ceremony. As a child, my daydreams were about book deals, shoes, fame & glory! So when it came to planning a wedding, I didn’t really know what needed to be done.

I guessed that I should start with the dress. I spoke to Betsey Johnson about having her design a dress for me, which she was excited to do, but unfortunately, a month’s notice was cutting it a bit too close. Sad trombone!

As much as I love Say Yes To The Dress, I didn’t want to go that route. My second choice was to buy something vintage, & I totally lucked out: I found my dream dress on eBay for $100! It was from the 1950s, a strapless dress with a sweetheart bust, knee-length & a-line. It arrived & fit perfectly. I was over the moon!

My idea was to go classic with a twist. I remembered Sarah Jessica Parker saying the one regret she had about her wedding was that she didn’t wear white, & as much as I would have loved to have worn a pink sparkly dress, I do that all the time anyway. Wearing white would be special, a once-in-a-lifetime kinda deal. I wore white with pink accents, & it worked a treat!

Our wedding officiant was Judie Guild. Finding her was fantastic serendipity. After Mike & I went to City Hall to pick up our marriage license, we were struck by how very DMV-esque it was. You take a ticket with a number on it & they call you up… It’s not terribly fun or exciting! We had always wanted to do something simple, but we also didn’t want to do something that we’d look back on & think, ‘We could have done that better.’ So, I started searching for alternative (read: unusual & inexpensive) wedding venues, & discovered Judie’s site. On it, she had a list of great places to get married. When I read “Brooklyn Bridge”, I was thrilled! One of Mike’s relatives worked on the Brooklyn Bridge when it was being constructed, & the first time we rode across it on his motorcycle was the first time I realised I was falling in love with him.

But… When we went to the Brooklyn Bridge a few days before the wedding to scope it out, we saw that half of it was covered in construction. It didn’t look good, & there weren’t really any suitable places for us to get married, especially since we had a few guests coming. As we walked across, Mike had the idea to get married in Brooklyn Bridge Park, which is just underneath the bridge, & upon investigating the area, we stumbled upon a staircase with a view of the Manhattan skyline & the bridge.

I think the thing which took us longest was choosing readings! I love poetry but the poems I liked best didn’t appeal to Mike very much. There was some discussion about using a song by the Ramones — like Baby I Love You, I Want You Around or Oh Oh I Love Her So — but we decided on Rose Of My Heart by Johnny Cash, instead. Rose Of My Heart was written by Johnny Cash for his wife, June, & when Mike suggested it & we listened to it together, I almost burst into tears. We had a winner!

On the morning of the wedding, I woke up, kissed Mike goodbye & took a car to the Smyth Hotel in TriBeCa where my parents were staying. Over the next hour, people started to trickle in… Chloe, then Ashley, then Kristin, then Ben, & they fluttered around me like wonderful butterflies while I got dressed & ready. They all did such an incredible job of making the day beautiful, fun & stress-free, which I really, really appreciated!

Ben, Kristin & my mother took a cab to the park, while my father, Chloe & I took another car & arrived a little later. I wasn’t nervous at all — a little excitable, but not terrified in the least!

The plan was that my father & I would walk together up this path that winds around the back of the park, then emerge from the top of the staircase & walk down to meet Mike. The problem was that he was waiting for guests at the same place our car pulled up. I didn’t want Mike to see me before we got married, so I hid behind some trees when I saw him before the ceremony! Thankfully he was oblivious! I saw him through the leaves (!!!) & I remember squealing to my father, “ISN’T HE SO HANDSOME?!!!” It was really exciting to see him all done up, he looked great & I couldn’t wait for the ceremony!

We are clearly related!

Our ceremony was short & sweet. We stood & faced one another during the whole thing, Mike holding my hand with both of his. We were so excited to be getting married, & felt totally unaware that there was even anyone else there.

The weather on the day was perfect. In the morning, it was quite overcast & grey (which makes for great pictures!), & it was like that until Judie pronounced us married… & all of a sudden, the sun came out in full force!

We bought bubble guns for all our guests to play with. My mother was in charge of buying them… Of course, she bought pink ones to coordinate with our outfits!

Mike & my father both wore pink socks. Isn’t that so great?!

As much as I love my Louboutins, they are DEATH to walk in! As soon as the ceremony was over, I switched to my Betsey Johnson Pollys!

Chloe brought her Polaroid camera with her!

Comfortable shoes are such a blessing!

We found church pews in a bookstore!

My parents have been married for 30 years!

After our wedding, we headed just up the road for a celebratory lunch at the one, the only, the original Grimaldi’s Pizzeria! There was a huge line (as always), but thankfully, they were so excited to see a wedding party that they waved us in ahead of everyone else! Bless!

We sat at an enormous table & cut the pie as husband & wife… No wedding cake for us!

With my two favourite men!

We ended the day by taking the water taxi back across the river to Manhattan… It was the PERFECT day. Happiest of our lives.

I think what helped to make it so good was that we weren’t trying to impress anyone, or appease fussy relatives. We were just doing what felt natural & good to us. I don’t believe that a wedding has to be an expensive, over-the-top spectacle. In fact, I think it feels more genuine & beautiful when it’s a little understated. It’s about uniting two people, & shouldn’t be about trying to outdo everything you’ve ever seen.

My advice to any brides is to keep it simple. When you do, the realness shines through.

Our flowers — my headband, the bouquets my mother & I were holding, & the flowers in my father & Mike’s buttonholes — were by Flora NY. They did an INCREDIBLE job.

My dress was a vintage 1950’s strapless sweetheart a-line wedding dress. I found it on eBay & paid $100 for it! I wore a vintage pink petticoat underneath, which I bought on Etsy for about $40.

My sash was an Alice sash by Sara Gabriel.

My shoes were Christian Louboutin Hyper Prive 120s, & I wore Betsey Johnson starburst Pollys the rest of the time!

My make-up was by Ashley Spedale, & hair by Kristin Jackson. Chloe Rice took the photos, & Ben Vogel shot the video…

« Carousel: Finding Your True Calling & Can New Shoes Make You Happy?
A Girl Without Dreams Is A Girl Adrift… »