Why Is Gala In NYC? 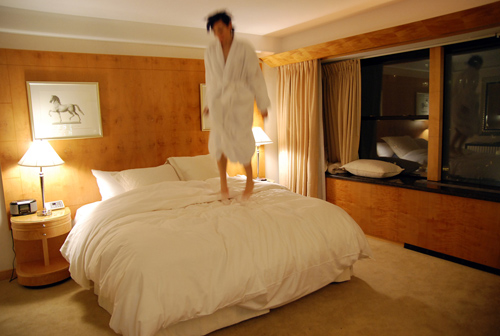 “Your life in New York seems absolutely fab! I was just wondering — what’s the story behind your trip/move? Did you just decide to pack up and spend a couple months in NY? Did it start as a vacation and then turn into a longer term thing? How’d you score a short term lease on an apartment? So many questions! Sorry to be a needy blogger. I’m just so curious!”

Well, while I try to keep my life off iCiNG as much as possible, people keep asking me these questions, so I figure I might as well explain it! (By the way, I am sitting on the fire escape as I type this up. How NYC, right?)

It was Simon’s birthday at the start of May, he was going to be 37, & we decided we should do something fun for it. We weren’t sure what, exactly. I had already planned to buy him a nice watch, but we thought it would be good to indulge in some kind of event, too. Well, as you all know, we’re both into the raw food thing, so one day when I was browsing We Like It Raw, I noticed that they were holding a raw chocolate rave in New York City. I ran into the other room & showed Simon & we sat around, talking about how incredibly cool it would be to go along.

We kind of left it at that for a few days, & then a guy Simon does a bit of work for told him that he wanted him to fly over to London for a couple of weeks to put in some hours on a project. He wanted him to fly over on his birthday, which Simon wasn’t very keen on. Long story short, we negotiated that Simon would go to London if this guy flew him to New York first, & paid for my return ticket too.

So, that was organised, & we thought that after a few days in New York, Simon would go on to London & I would maybe kick it in NYC for another week before flying home. Then I thought, what’s the rush? Why would I want to go back to Melbourne if instead I could be staying in my favourite city of all time? (Valid question, right?) I have designed a lifestyle for myself where I can work from anywhere — ultimately, all I need is my computer & I’m ready to go. It makes sense to take advantage of that flexibility. So I decided I’d stay for a while, see how I liked it, & come back when it pleased me. We had flexible tickets, & all was fabulous.

We flew over, stayed at the New York Palace, & walked around a lot, sussing out the various neighbourhoods & getting a better idea of where we might like to live when we finally moved here. NYC has always been my dream, & Simon has been amiable to it but never really psyched. Anyway, the few days we spent here together were wonderful — the city was laden with delights at every turn, we met loads of fascinating people & really had a great time. Simon started to feel much more enthusiastic about the concept of living here, & when he left for London, we had basically decided that the plan was to get settled in NYC as soon as possible.

When he left, I went to stay with an acquaintance, we went to Florida, we came back & I decided that I needed my own place. It’s so hard staying with other people for any length of time, as most of you probably know — it’s awkward to be sharing their space & it’s hard to feel relaxed enough to get anything creative done (which is obviously a major thing for me, given I make my living from writing).

I started looking around on Craigslist for sub-leases that appealed to me. I looked pretty constantly for a couple of days, & didn’t find anything great, but I whipped up a form letter that I would email to all the places that didn’t look like total hell-holes & crossed my fingers that that would do the trick. I needed to be out of this person’s house by Sunday, so on Saturday I booked myself two nights (from Sunday) at the Sofitel, figuring that I would use those two days to house-hunt & if I hadn’t found anything by then… well… I’d do something else. I wasn’t sure what. Yes, I was quite nervous. In fact, for a while there, I was so stressed out that I felt like I was on the verge of a heart attack. The concept of being homeless in a city like New York really didn’t appeal to me much.

On that same morning, I’d seen a place advertised on Craigslist that I really liked the look of. It was minimalist, but looked really well-kept & clean & tasteful. It was kind of expensive but by that stage I didn’t care, I was happy to pay more for a better place than to bargain & haggle for a hamster cage. Miraculously, they called me that day, & we made arrangements for me to go over & see it the next day.

I checked into the Sofitel on Sunday morning, put down my luggage & jumped on the subway to go & see this place. Five flights of stairs later, & breathing unattractively, I was at the front door. The couple who owned the place were totally cool — almost intimidatingly hip — but very friendly. They showed me around, explained the idiosyncrasies (like the toilet, which is in the hallway — private, but in the hallway!), & then asked me what I thought. I loved it. I said I’d be keen to sub-lease it. They said okay. I squealed, probably, then told them I’d alter my hotel reservation so I’d only spend one night there & then move in the next day.

So, that’s basically what happened. I am here until the 28th of July, & then I go back to Melbourne for about a month, before returning to NYC for my 25th birthday (eep!) on September 13th.

I’m not sure what will happen on that trip, but ideally I would like to be living permanently in NYC by Christmas this year. It’s a bit of a nerve-wracking goal, but I like it like that!

It’s amazing to be here. To me, it’s pretty much the ultimate challenge. Being here alone is a definite test of my independence, strength & character. It’s scary at times — occasionally I have a mild flash of panic when I realise that there’s nowhere in the city that I feel familiar with — but it’s definitely worth it. I know I am going to leave here a changed person, & I’ve been having such a great time. It’s wonderful to know that it’s all my own making!

Hope this has sated your curiosity, little cuties!