I am a freshman in college. 18 years old. Like most other people, I was raised to believe ‘sex is bad.’ I had to take several required courses in high school whose purpose was that of convincing my peers and I that sex is bad and will give you chlamydia and eventually kill you. We were shown pictures of disfigured and disgusting genitals that had fallen victims of numerous stds and were persuaded that this, too, would one day become our genitals if we were to take part in sexual intercourse before marriage. Long story short, we were manipulated into a state of being scared shitless about sex.

Thus, my friends and I went through high school as virgins. Any girl who was outed as had having sex became known as a whore and was consequently looked down upon. My friends and I gasped when we heard that so and so had sex with so and so. It was forbidden to have sex and those that remained abstinent were respected.

I have never had sex, or even done anything close to having sex. I barely have had my first kiss. I used to highly respect myself and feel proud of myself because of this fact. After listening to Love and Sequins number 1 and reading/listening to other similar articles about loving yourself, I felt that not having sex with just any guy was a good thing. It showed that I love and respect myself. But now that spring break has arrived and I have been catching up with my old friends from high school and finding out that they’ve been screwing anything with a penis, I feel like a prude. Like a butchy square. I feel worthless. Unattractive. And I can feel myself becoming desperate.

I don’t know what to feel or think. I don’t know if I should hold my head high or reevaluate my beliefs.

I feel lost and confused.

Hope all is well

Oh geez. For all its imperfections, I am so glad I was raised in New Zealand where we are given realistic information about sex in school. The way they teach it is, “We know you’re going to do it, so here’s what you need to know”. We were taught about the risks, how to prevent STIs & we discussed the positive effects of having sex too.

So I’m sorry that your introduction to sex & sexuality was so unpleasant, not to mention UNTRUE! That kind of “education” scars people for life! It really does, it gives you such a negative, awful mindset about something which can be so beautiful, causes so many problems when it comes to truly enjoying sex, & breeds so much judgment & contempt.

Firstly, let me just say this. What you were taught is wrong. Having sex with one or multiple men does not make you a “whore” — it doesn’t make you anything, other than a person who is capable of making their own decisions. The amount of sex you have, the kind of sex you have, the things that get you off & the way you like to express yourself sexually do not add or subtract from your value as a human being.

College is a tricky time, because it’s when everyone escapes mom & dad & starts to make their own decisions. Rampant hormones & free-flowing alcohol have been excellent contributors to many errors of judgment & voracious discarding of all previous moral strongholds! Which is a wordy way of saying, “Tequila sure is tasty, let’s bonk!”, & waking up disoriented before doing ye olde walk of shame in last night’s little sequinned number.

Really all your recent experiences indicate is that your previously pro-abstinence friends like to follow the crowd. When they were at school they did what they were told, & now that they’re out they’re doing what everyone else does. So even though I am not pro-abstinence, kudos for sticking to your guns. 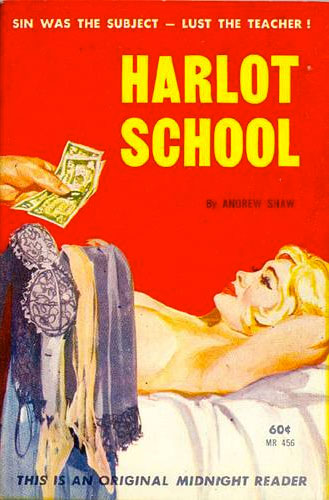 …Are you enrolled?(Imagine the classes! Cute Panties 101, WinsomeFlirtation Techniques, Introduction To Dirty Talk…)

Now for the overshare.

I believe in trying the merchandise.

I became “involved” with my first boyfriend at age 16, after we had already been together for a year. I’m really glad that he was my first, because we were in love & all those things. I have no regrets about that at all — I was more than ready & it was a good experience. Most people at my (all girl) school weren’t sexually active yet, & I remember having some girls come to me & ask me “what sex was like”, as if I was some kind of authority! I don’t remember what I said but I’m sure I acted mysterious & superior about it!

While I have had my share of dalliances, most of my sexual experiences have been within the confines of an exclusive relationship, & really that’s how I like it. It’s great to be with someone who you trust & respect, as opposed to just sleeping with people randomly. I think it makes you more likely to experiment with new things (since usually if you only sleep with someone once, you’re less inclined to say, “Let’s try THIS!”) & it helps generate healthy self-esteem around the idea of sex. If you sleep with someone once & they pretend you don’t exist the next time you see them, you’re not going to feel great. Obviously relationships can go awry, but to me it seems more likely that you’ll feel good about sex if you’re having it with someone who respects you, even loves you.

I am not shy about the subject — I love to have sex. I love to experiment & I know what I like. I start to feel restless, irritable & cranky when I have trouble with my sex life. I also think sex is a great healer, something which brings people together & an essential part of an intimate relationship.

I am also someone who likes to talk about sex a lot, I think the subject is fascinating, & actually when I meet people who are uncomfortable talking about sex — not necessarily giving me the grisly details of their sex life but just speaking about it in a broad sense — that makes me feel kind of weird. Like something is amiss. I am so used to it being an essential part of conversation that subtracting it from the equation makes me feel awkward.

I feel like it is something that is important to talk about & discuss. Being embarrassed about it can prevent you from learning really important things (everything from how to use condoms to the side-effects of birth control to how to have an orgasm), & so many people ARE too embarrassed to talk about it! Come on! Bring it! Let’s talk about vibrators & fantasies & the weirdest place you’ve ever had sex! I don’t care! It’s just information, no judgment!

Sex is really important, & having the tools or even just the “permission” (from society or within) to experiment with your own sexuality is so vital.

Some people won’t agree with this, but when I had this thought, it was like stumbling into a bright room. I had a realisation a little over a year ago that just sleeping with people for the sake of racking up numbers, or just doing it “because you can”, is meaningless & all about ego. It’s about validation. What are you getting from that experience that you could not get from masturbation? Connection, yes, but if this is just some random person you’ve met, how deep can that connection really be? It’s about validation. Validation that you’re pretty, or cool, or whatever. Fill in your own blank.

I think that a lot of us, as young people, really crave connection but don’t know how to go about creating it other than through sex. There are so many wonderful ways to get close to someone that don’t involve taking your clothes off, & yet we so often bypass them in favour of a boozy romp. Sex doesn’t guarantee a bond or any kind of interconnection.

& why should we look outside ourselves for that approval, that endorsement, that acceptance? Why do you need some stranger to tick your box? (Pun totally intended.) WHY? Why does how THEY feel about you matter more than how you feel about YOURSELF? That is so wrong, & we all know it. Inherently, we know it.

While I believe having sex is important, doing it for the sake of it seems like a fruitless endeavour. Considering the massive amount of risk, you really have to ask yourself what the point is. I accept that everyone has an era of experimentation where our hormones are rampant & we sleep with a bunch of wildly inappropriate people, & most of us wouldn’t take that back. But beyond a certain point, leaping into the sack with everyone you meet is not necessarily the answer to finding out what gets you off. Buy a sex toy. Read some books. Figure it out on your own. It’s much more liberating.

In short, my darling, you are not wrong, a prude, a butchy square, worthless or unattractive for not having had sex yet. We all make our choices. I know some people who started experimenting with their sexuality at a young age & some who waited until they were mid-twenties. It doesn’t “make” you anything. Enjoying sex doesn’t make you a slut & deciding not to have it immediately doesn’t make you boring or innocent.

Whether you decide to start following in the footsteps of your friends or not is entirely up to you. As hard as it might be (considering your past programming) not to judge your previously chaste friends, you need to realise that they are just doing what they can with what they have. They’re trying to figure out the puzzle of their own sexuality the best way they know how. We all get there in different ways.

Sex is rad, but it will always be there. There is NO PRESSURE. You don’t have to start now. (Hey, you don’t have to start ever.) Wait until you meet someone who makes your heart flutter (& your panties ping!). In the meantime, discover your own sexual roadmap. It’s one of the best things you will ever do for yourself.

Nonpareils: Are you sexually active or not? If you are, what age did you start? How do you feel about the choices you’ve made?

« The Search For The Perfect Summer Dress
Things I Love Thursday »