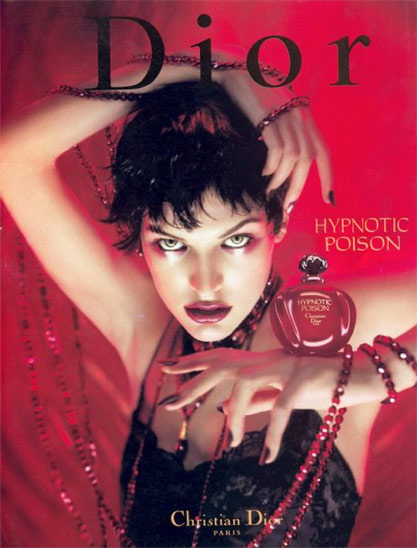 What was your first foray into the world of perfumes?

Mine was Christian Dior’s Hypnotic Poison. I am positive that the ad featuring Milla Jovovich looking like some sexy voodoo witchy priestess is what drew me in initially. Hypnotic Poison came out in 1998, when I was 15 years old, deeply ensconced in my I’m-so-goth ways. (Le cringe.)

I think that ad actually influenced me a lot more than just wearing the perfume. I also used to wear red eye-shadow all the way around my eyes — I think in an attempt to imitate the “heroin chic” look that was major in the 90s. (Can you believe heroin chic has its own entry on Wikipedia?! These are amazing times.) It all went wonderfully with my collar (black leather with studs & red stitching, don’t ya know), blue-black bob haircut, & obsession with Revlon’s Vixen lipstick & nailpolish. (Oh my god! They still make it!)

It’s funny though, when I look at that ad & pictures of the perfume bottle, I remember exactly how it smells. Vanilla, almonds, roses, cinnamon & jasmine. Very sexy. Probably too sexy for a 15 year old girl, not that I cared.

Now I want to go & sniff some to see if my olfactory memory is as good as I think it is!

At the moment I switch on & off between a few different perfumes — Miss Dior Cherie (strawberries & vanilla), Chocolovers (chocolate & vanilla), & The Exact Friction Of Stars (caramel, vanilla, coconut, chocolate, etc.). Yes, I like to smell like a dessert cart!

So, how about you? What was your first scent & what memories do you associate with it? What do you wear now? Are they similar at all?

(Thanks to Mystic Medusa for making me think about this!)