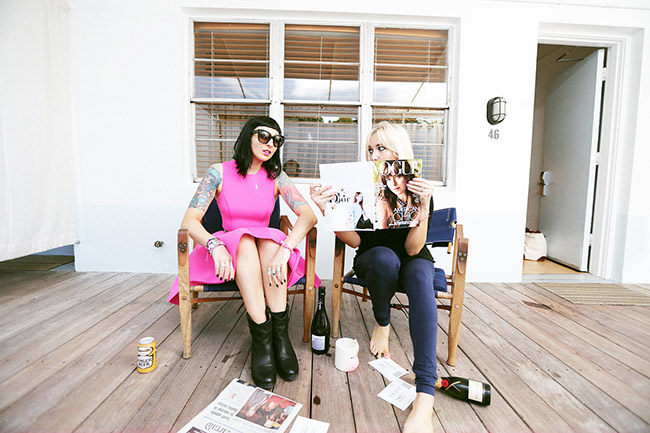 Our time in Miami flew by. We couldn’t get enough, so on our last day, we decided that we should get as much done as possible! We woke up to a crazy tropical thunderstorm — I’ve never heard or felt such fat raindrops!

Thankfully, since we knew ahead of time that there would be a storm rolling towards us, we had earmarked Thursday as our spa day. The Standard Spa is known for its massages, so it made sense to keep it super-local! We grabbed umbrellas and walked over to the spa.

We kicked off the day with Vitamin B12 shots. We were both B12 virgins, but I was swayed by Emily’s insistence that her sister-in-law loved them and that it makes you feel like you’re full of sunshine. How could we say no?! The process was quick — a jab in the arm which took less than 30 seconds — but neither Emily nor I felt much… Maybe it was a dud batch?!

“Do you feel anything?!” we kept asking. The other would shake her head. Oh well. We gave it a go! (Have you ever tried Vitamin B12 shots?)

Our next stop: 90 minute massages — exactly what the doctor ordered — followed by sublime floral facials. My esthetician used Tata Harper products, and massaged my face with teeny glass balls full of chilled water. It was really odd, but it felt amazing! 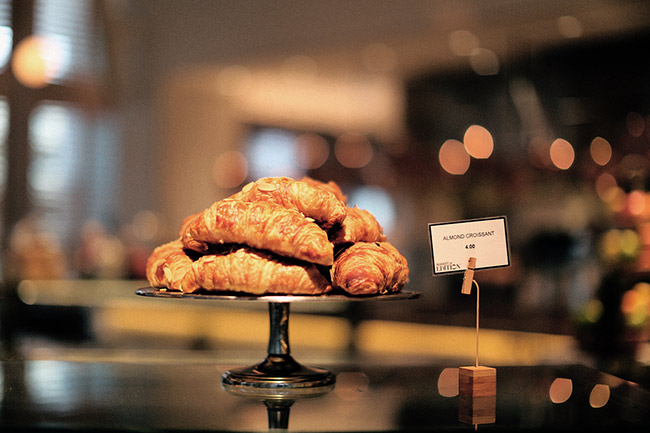 Feeling relaxed and refreshed, we took showers, put on our matching kaftans (oh YES girl) and headed to The Edition for lunch. We had been gobsmacked by its beauty the night before (when we ate at Matador), and this time, we wanted to check out Market. 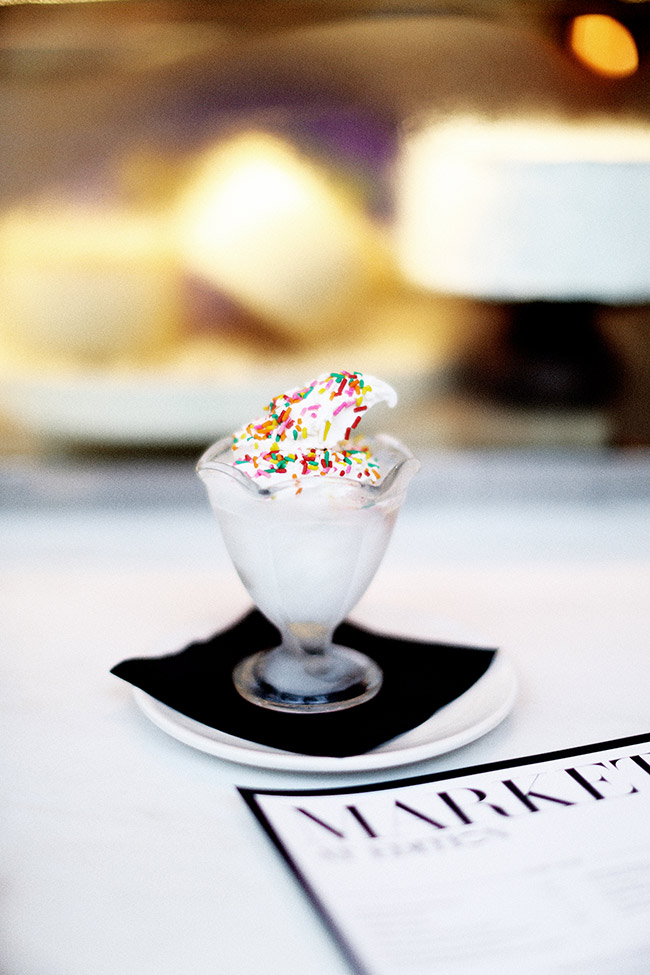 Market is a little more low-key than Matador. It’s a food hall, but it also a food hall done by Jean-Georges, so… Y’know. It’s not that low-key. Emily was psyched on her ice-cream sundae with rainbow sprinkles, and I ordered miniature donuts because I couldn’t resist their cuteness. 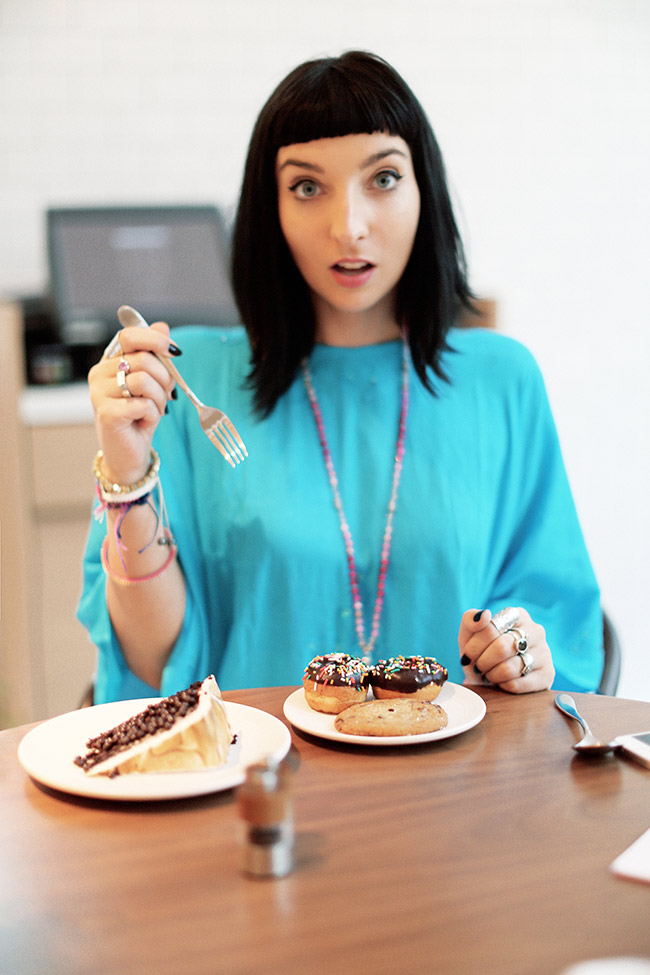 I also ordered a slice of marshmallow chocolate cake (YOU CANNOT IMAGINE) and a salted chocolate-chip cookie… Because life is short, sugar is delicious, and why the hell not? Fuck yeah I ate that. 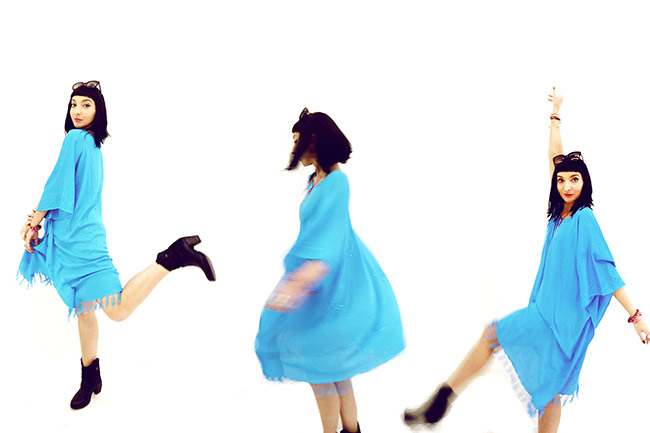 After our enormous lunch, we decided to take advantage of Edition’s enormous blank white walls and shoot some weird portraits of each other. Emily snapped this dancing montage of me, and then… 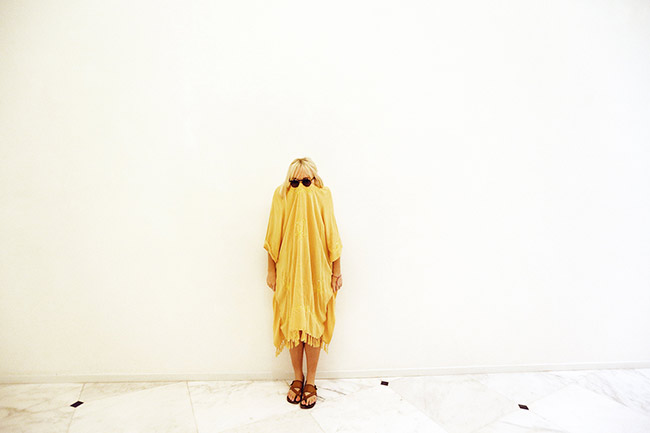 I shot this picture of her, which makes me laugh so hard. “This is my new favourite photo of me!” she exclaimed.

(And — I told you we wore matching kaftans! So much comfort. So much joy. #kaftanlyfe) 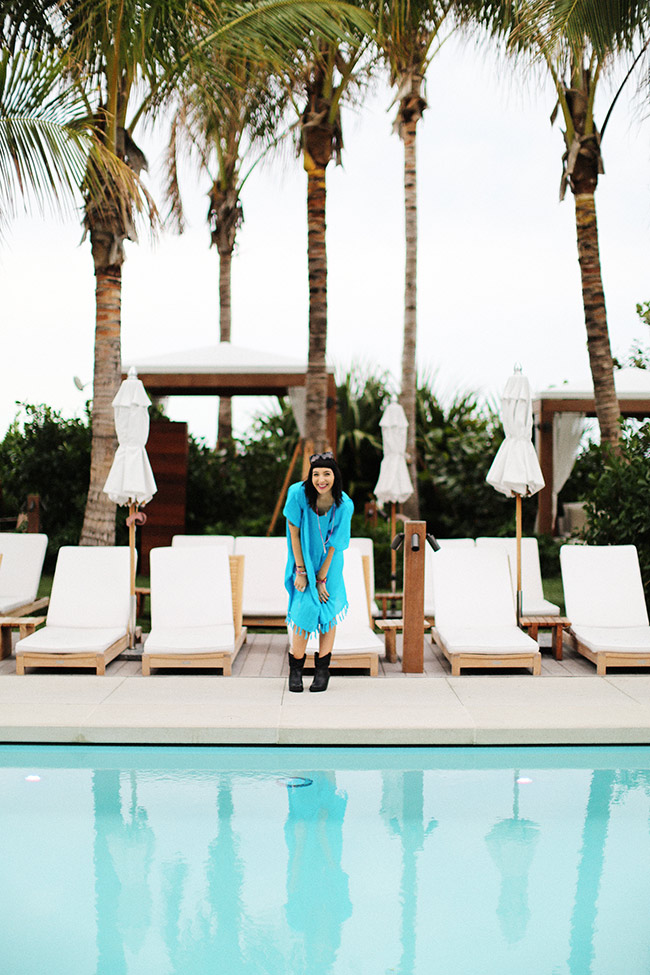 We headed outside to investigate the pool area, which was surrounded by glorious cabanas and quite a bit of astroturf. I have always had a soft spot for astroturf. For years, I wanted an office that featured an astroturf rug… And some strategically-placed flamingos. Maybe one day! 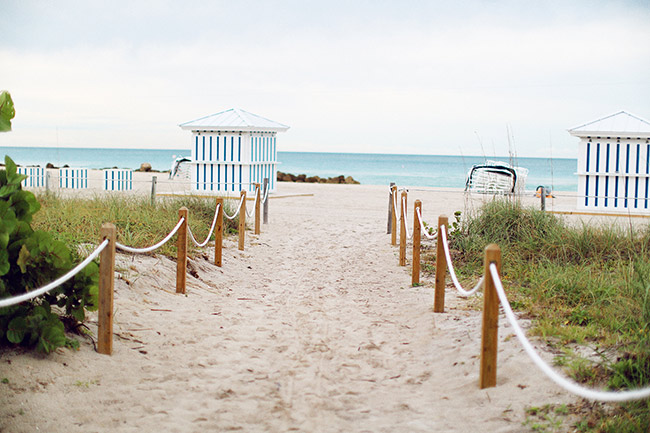 The Edition hotel has its own private entrance to the beach. It looks like this. Thankfully, it had stopped raining, but the mercurial skies remained. It was so beautiful. 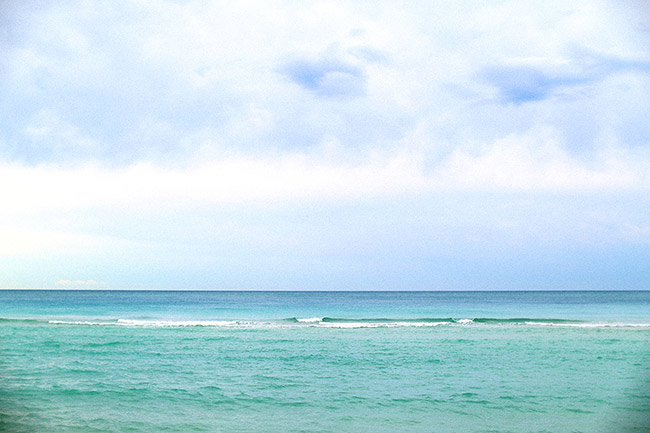 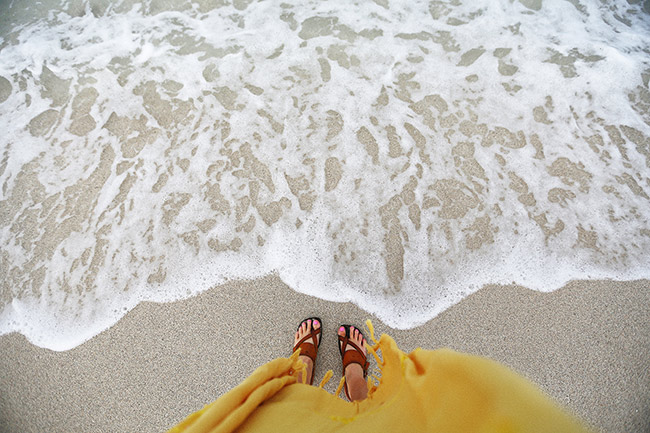 We got our toes wet and plodded along the sand. 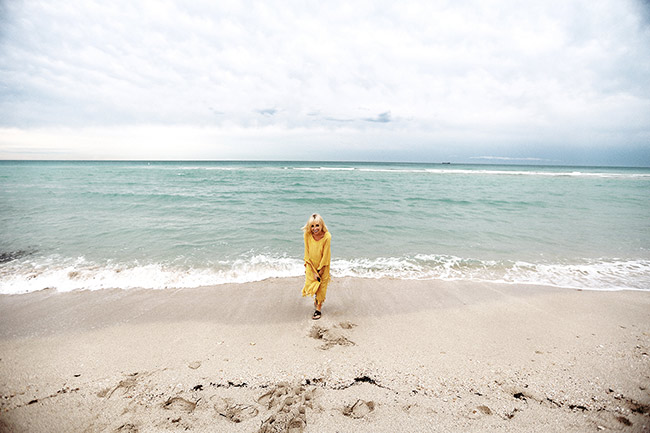 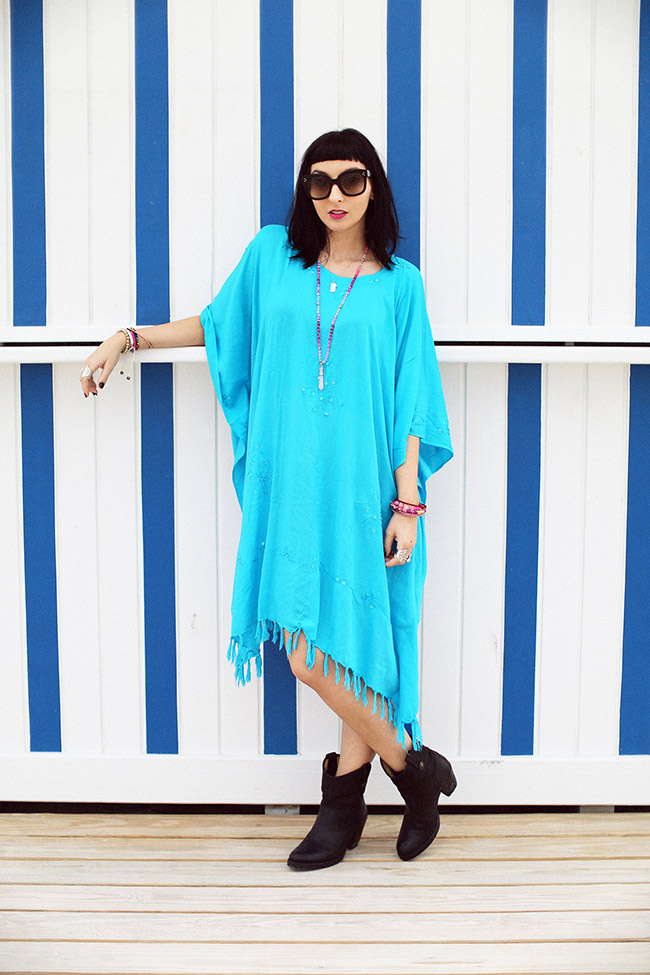 I was a little bit in love with these striped huts dotted along the beach. Wandering around was great: the weather was so weird that we didn’t see any other people, except for one woman who asked us to take an iPhone photo of her with her bicycle. I don’t know what everyone else in Miami was doing. Probably holed up in their hotel rooms ordering room service! (Always a good use of time.) 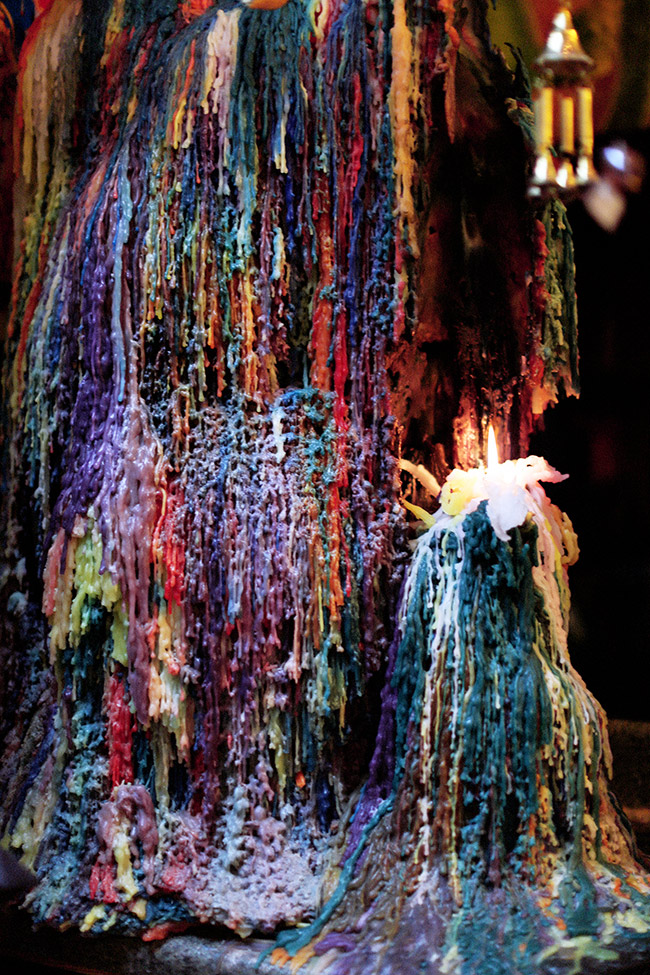 After our beach adventures, we hopped in a cab and went to Flossie’s, a metaphysical shop owned by a woman — named, you guessed it, Flossie! — in her 60s with pale pink easter egg hair. I always love to research metaphysical shops on Yelp whenever I go somewhere, and her store sounded intriguing.

We were not disappointed. Her store is chockablock with crystals, candles, oils, and, sort of inexplicably, Tupac posters! 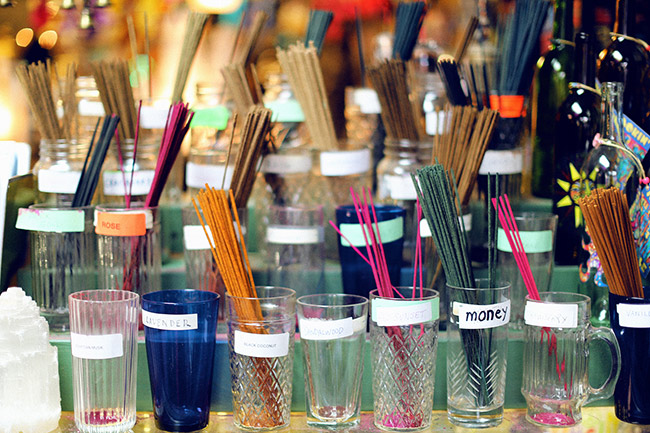 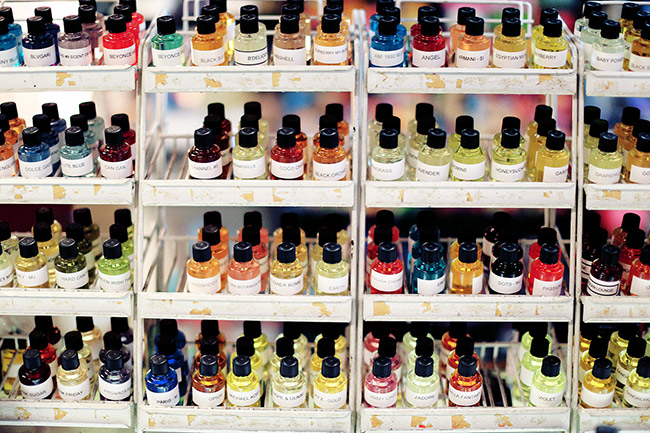 The most incredible thing about Flossie’s is the array of oils. This photo only shows a small selection — there were hundreds. The majority of her oils are perfume dupes which smell identical to all of the major fragrances on the market today: think Tom Ford, Balenciaga, Gucci, etc. I don’t usually go in for replica perfumes because the idea kind of weirds me out, and 99% of the time they smell terrible. Imagine my surprise to discover that the oils at Flossie’s smell incredible and cost a pittance: $3 each or 6 for $10! Needless to say, I stocked up, and have been wearing a new oil every day! 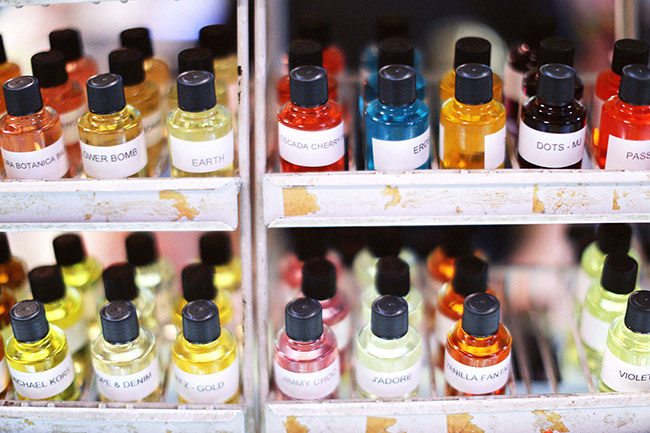 Flower Bomb, Escada, Michael Kors, Jay-Z, Jimmy Choo… The list goes on. I don’t know who makes them, but whoever does it has a mighty good snoot! (I love that word. I learned it from Steve Braunias, one of my favourite New Zealand writers.)

Flossie has an assortment of her own oils that she mixes by hand. She has one for every astrological sign, an oil for gratitude, and many others. Of course, I snapped up a bunch! 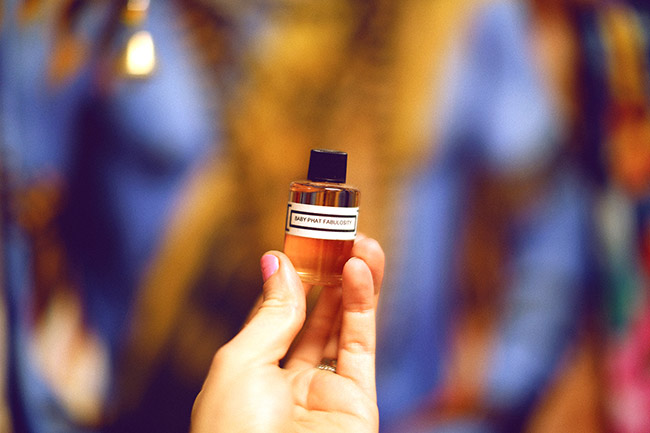 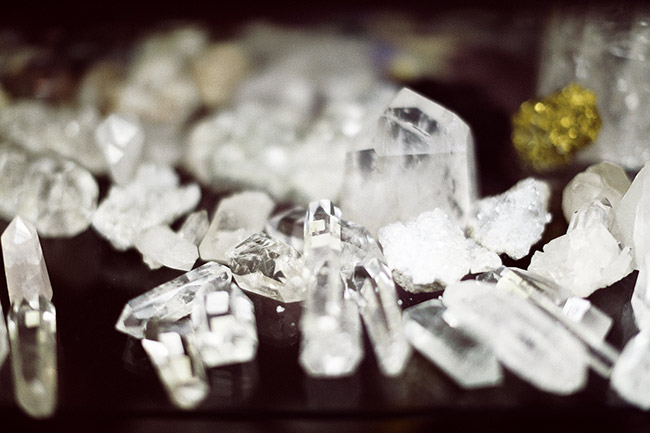 A couple of hours flew by as we inhaled oils, chose crystals, and picked out jewellery. 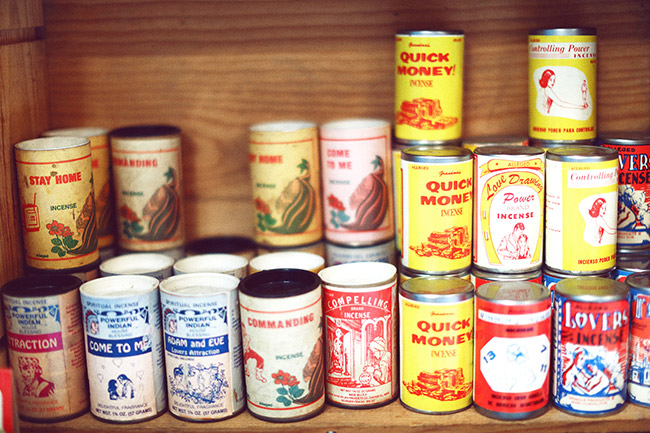 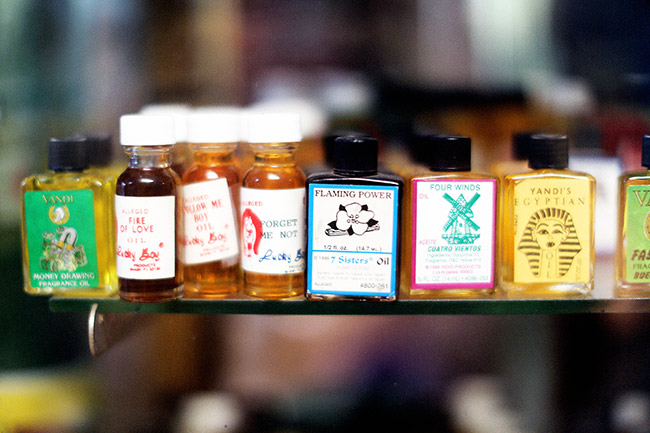 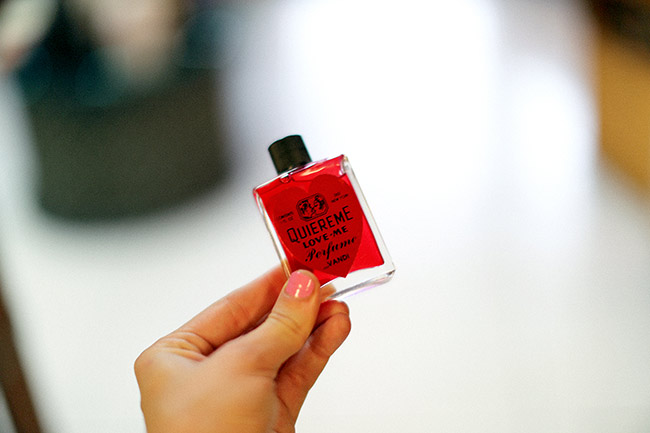 Emily and I both bought this one because the label was so damn good. Anyway, we had a blast at Flossie’s — totally worth the $25 cab ride each way! In fact, we covered ourselves in so many different oils that when we got in a cab back to The Standard, our driver sighed with disgust and rolled down his window. Hahah. 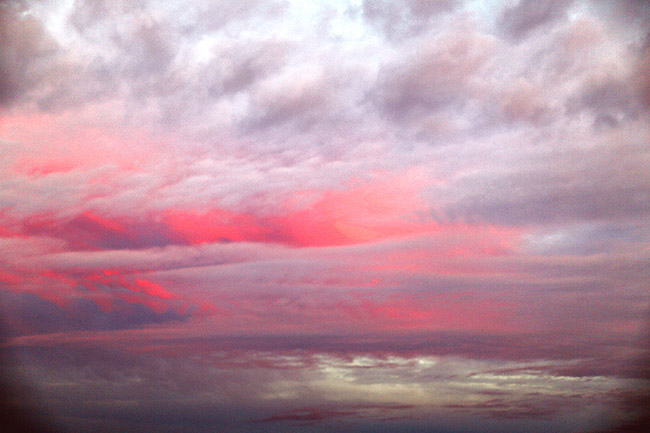 The day was starting to wind down. This beautiful cotton candy sunset was such a pleasure to behold on our last night in Miami. 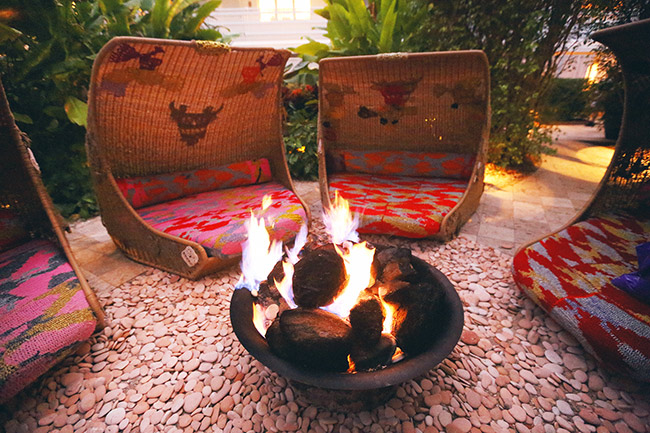 We headed back to our hotel with our bags full of loot. The sun was starting to go down, the fire-pit was glowing, and we told ourselves we’d pay it another visit at the end of the night. 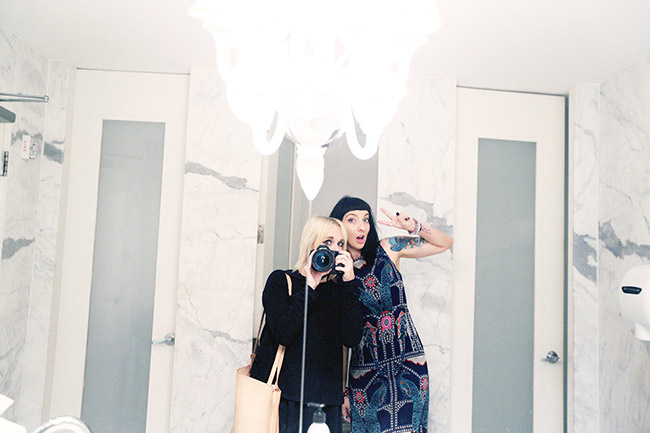 For our last meal in Miami, we went to Bianca at Delano, where we sat outside, ate shrimp, researched unsavoury nightspots on our phones, and enjoyed coconut, chocolate and strawberry sorbet and gelato. …And then we took photos in the bathrooms, because how can you not when there’s a chandelier over the sink? 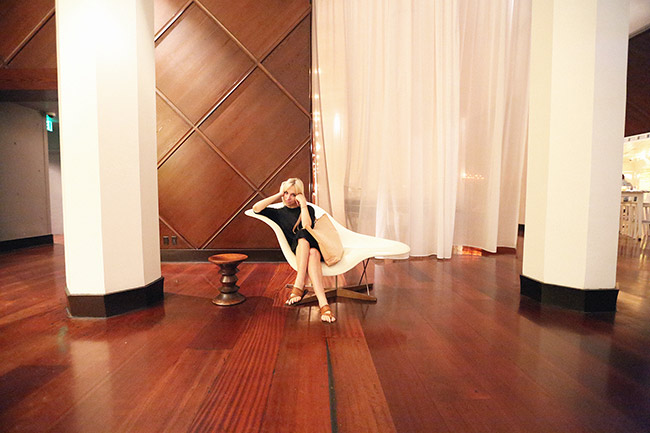 If you’ve never been to Delano, it’s a must-visit. It’s very Alice In Wonderland-inspired, with oversized chairs, voluminous billowing curtains, and towering hedges. 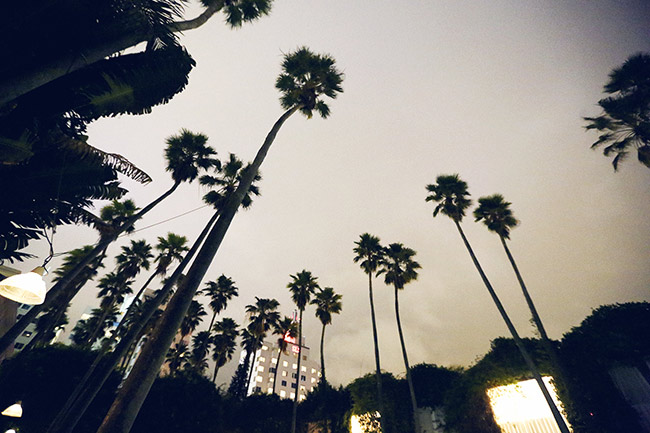 Plus, more palm trees than you can shake a stick at. 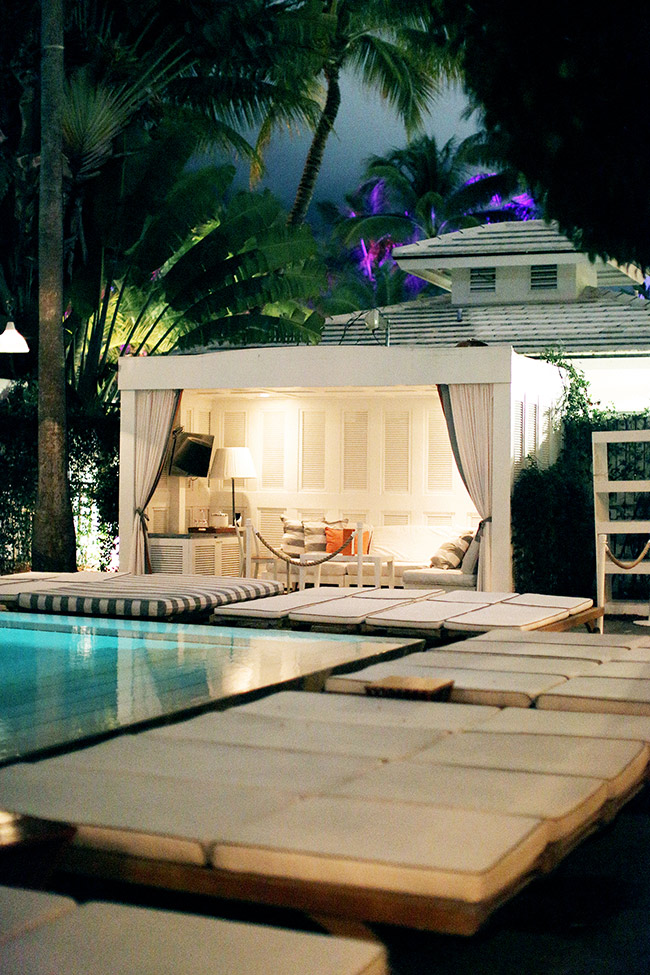 Their cabanas are gorgeous, even at night.

After dinner, we headed back to The Standard, where we made lists of things we wanted to let go of, and then burned in the fire-pit. 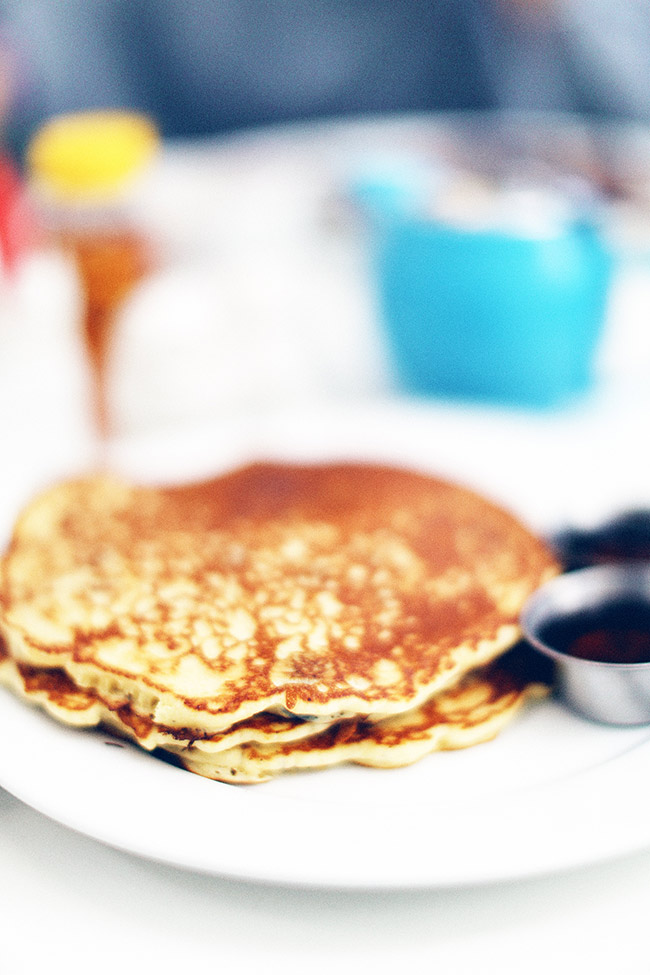 The next morning, we only had a few hours before we had to head to the airport. I scampered over to the fire-pit area to film this video, and then we had pancakes and French toast. Delicious. 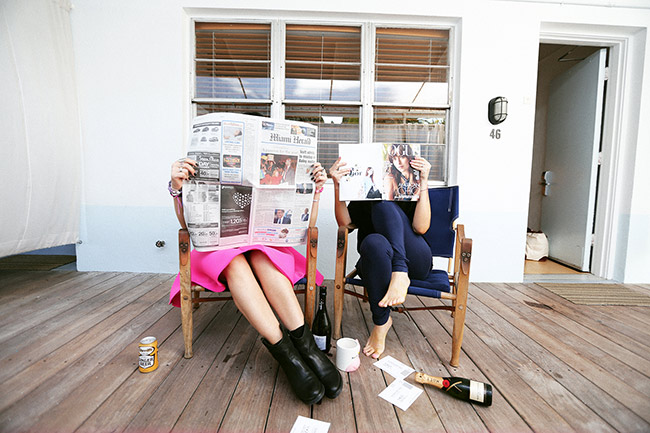 We changed back into our un-cute hobbit clothes, finally triumphed over the battle to zip our suitcases closed, and flew home to NYC, where — spoiler alert! — it was still freezing.