I Want To Be… A Cupcake Queen! 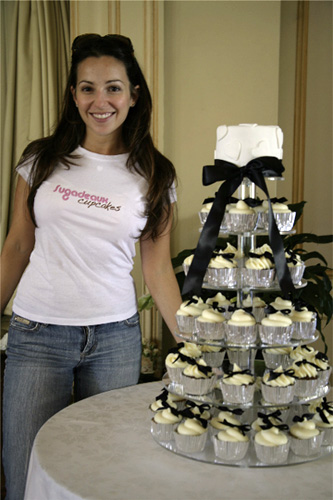 Jess & I got in contact at the end of 2007 when she emailed me to introduce herself, say she had just started a cupcake business & ask me if I’d like to taste-test her product. (Would I ever!) Since then we have become fast friends, shopped up a storm together in New York City, & sent many, many crass emails back & forth. As well as being an awesome, feisty & inspirational woman, she also makes the best (no comparison) cupcakes I’ve ever eaten. & I’m not just saying that!

Here’s an insight into her business & what she does!

Tell us about what you do.
I am the director, marketing executive, pastry chef, flavour consultant, administrative assistant etc. etc. for Sugadeaux Cupcakes. Okay, I run my own cupcake business. Did I mention we have merchandise?

How long ago did you start on this path?
Just under a year. I had always loved baking and trying new recipes, particularly with an interest in old-school American cakes and pies.

How long were you doing it before you made it into your career or primary form of income?
I had only been trading for about a month when I realised there was no need to hang on to my corporate office gig! But, as I said, I had always loved cooking and baking, I didn’t just decide one day to jump on the bandwagon because they were a hot fad in the States…

Did anything significant happen to get you to that point, or was it a series of small steps?
It was slow but steady growth that allowed me to do cupcakes as a career. But, before I launched, I invested time into the recipes, designs, research about where I wanted to position myself in a potentially crowded market, graphics, branding etc. etc. I had some great friends help me build a great website — invaluable.

Do you think official qualifications are important for someone entering your industry?
Not at all. I think it’s incredibly helpful to have professional training as a Pastry Chef (which I do not), particularly as they are familiar with great techniques which really help in inventing new recipes, and also tweaking current ones. I think it’s a bit of a matter of “you either have it or you don’t”. If you don’t have formal training, you still need to get to a place where you understand the chemistry of baking, and if you’re not interested in asking questions and seeking answers, you probably won’t be outputting the best product you could be producing… I am a firm believer that along with common sense, having the best product available will speak volumes. For example, I don’t have any flavours with banana in them, because I hate banana and wouldn’t be able to taste test. Pretty much it comes down to this: I produce what I would love to eat. If I don’t think it tastes the best it can, I don’t sell it.

What do you think is the best thing about working for yourself?
Autonomy, creative freedom, being responsible for my own time management, really maximizing my hours, not ever slacking because I’d only be robbing myself, plus I cannot recommend highly enough the satisfaction of being solely responsible for your own income. Score!

What’s the worst thing?
It’s a small detail, but it’s probably that I work by myself and therefore have no colleagues to whinge to or bounce ideas off. Your friends can only care so much about baked goods…

Rate how happy you are with what you do out of 100 (100 being the best, 0 being devastatingly awful) on an average day.
85. I’d like to be able to delegate, but I’m a control freak. I’m not sure 100 is attainable on an average day. There are definitely days in the nineties…

Would you call yourself a workaholic, & if so, are you alright with that? Do you think that’s normal for your industry?
I’m not a workaholic per se, but i am definitely 100% more motivated to work longer and harder now that it’s my own business. I think a true workaholic works themselves to the bone whether in their own business or being employed by someone else. I think in my industry, it’s more normal to delegate to an apprentice or other baker to do the work for you, basically teach the recipes and step back. I don’t do that, maybe one day if the workload is totally unreasonable I would, but not right now. The worst practice in the industry (in my opinion) would be changing the business to use packet mixes, to keep up with demand. If you became successful with a quality product, you never sacrifice that quality for production benefits. And uh, while I’m on a rant, I am religiously opposed to freezing cupcakes. I challenge anyone to honestly convince me that a thawed cupcake is EVER as good as fresh.

What would your number one suggestion be for someone who wants to do what you do?
Love food, love flavours, love baking, love weird kitchen utensils, love being creative. Do not do this because you think cupcakes are cute, or that it would be “fun”. Trust me, frosting 700 cupcakes gets non-fun pretty quickly, so the passion for the product itself has to be there. It’s not unlike yourself, Gala, although you clearly have a fabulous life and career, the fact is you do need to park your ass in front of a computer and invest quality time into writing and research. It’s not like you run around all day waiting for fabulousness to just happen… well, not every day.

…How about number two?
Damn you! Why did I read this after writing so much for number one?! Ok, number two is be realistic. I’m all for following dreams, but it is a business, it involves real money and you have to be sensible. For example, had there already been like 8 cupcakeries in my city, I might have decided that it’s not a particularly savvy idea to enter what would have been an already flooded market. I probably would have kept baking as a hobby for family and friends.

What do you wish you had known when you first started out?
How to rock a pair of pink cowboy boots… but then someone wrote this article…

Are there any major misconceptions about your job or industry?
Not really, it’s pretty transparent… As I kinda said before, it does take hard work, and a real love for the product. There is a general cupcake misconception I’m working hard to negate, which is that they should be covered in girlie flowers and ordered only on special occasions. So not true! I think they should be viewed like any other food — you crave it because of how it tastes, not because it’s cute.

What motivates you to keep doing what you’re doing?
I really adore baking, and the satisfaction of a total stranger with no agenda telling me that my cupcake is the best thing they have ever tasted is a pretty big motivator. It really gives me a huge sense of satisfaction knowing that armed with only a sweet tooth and pretty decent palate, I managed to create a food item this person adored. This is followed at a close second by the freedom and satisfaction of being your own boss.

Who do you look up to within your industry & why?
You HAVE to give props to Sprinkles cupcakes for kicking the whole thing off. They were the first to open a “cupcake only” retail store, with a very clean and high-brow image. I LOVE that they showed people that cupcakes don’t have to be synonymous with country kitsch shabby chic farmhouse decor. I’m sorry, but I don’t rate Magnolia. The story goes that their cupcakes were only produced because they had leftover batter from their basic butter cakes, and then of course the whole “Carrie eating a pink one” happened, and it went nuts. But, it was never the focus of their bakery, more of a happy accident i guess. On a local level, I actually don’t pay any attention to what my competitors are doing, because I don’t believe I’m the same as them. I’ve actually never even tasted a rival cupcake in Australia, because understanding how someone else’s tastes is not about to make me alter my own product.