I Want To Be… A Life Coach! 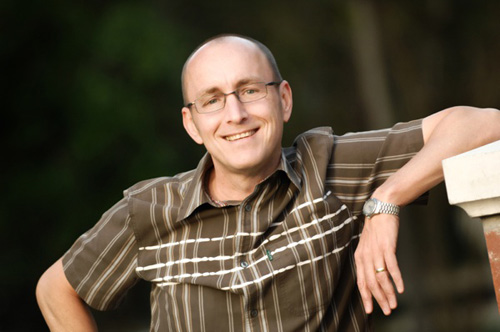 Tim Brownson is a life coach with a lovely British accent, based in Florida. I recently found his blog, The Discomfort Zone, & really liked his approach — he’s humorous, lively & he has a really cute dog! We started talking via Twitter, & I thought he’d make an interesting addition to the new I Want To Be… series here on iCiNG — especially since life coaches commonly help people work out what they want to do with themselves!

Tell us about what you do.
I work with people one on one either in person or more often than not over the phone. My main job is to help them find the resources within themselves to help them get from where they are now to where they want to be. There is a common misconception that a coach just tells you what to do. A good one won’t, a good coach will empower you and help you realize that the only limitations in place are the ones that you have set on yourself.

How long ago did you start on this path?
I started seriously about 5 years ago although it was probably a couple of years prior to that when I started to realize that working 80 hours a week and driving all over the UK wasn’t all it was cracked up to be. Initially, I started buying self development books on audio and thought “Wow this is really cool”. I then turned into a self development saddo, listening to anything and everything I could get my hands on and always expecting the next one to be THE one that turned my life around. Being in the car for so long each day was a great opportunity to learn and utilize what I had previously considered redundant time, although I probably took that to the other extreme.

How long were you doing it before you made it into your career or primary form of income?
I started coaching ‘properly’ in early 05 and quit my job in the summer of that year. I was lucky enough to have a very supportive wife that also worked and we didn’t have massive debt, so whereas it was tough at the beginning as I started to build the practice it wasn’t so tough that I was tempted to go back into sales.

Did anything significant happen to get you to that point, or was it a series of small steps?
Definitely small steps. I was just worn down by my job. The last full year in sales we spent $15k on vacations in an attempt to avoid the inevitable insanity from working too much. I started to realize that I was working my tits off trying to earn enough money to afford to pay for vacations to recover from working my tits off. Sounds ridiculous now, but at the time I was kinda slow on the uptake. Also I think like a lot of people, I was fearful about giving up a job that was paying me over $100k per annum for the unknown.

Do you think official qualifications are important for someone entering your industry?
Yes and no. I wish coaching were regulated because there are a lot of poor to average coaches out there. The fact is that in the UK and US anybody with a phone and the ability to talk can call themselves a coach. Regulation would force people to get accredited and reach a certain level of competence. Having said that, I have met many people with degrees that shouldn’t be allowed out without a guardian for their own safety. There are certain characteristics of being a good coach and although they definitely are learnable (is that even a word?), they also tend to be inherent in the good coaches. I have no doubt that there are good coaches with no qualifications and terrible coaches that have certificates lining their walls 4 deep, but it’s less likely.

What’s the worst thing?
Admin work I guess, but even that isn’t so bad. There are so few downsides that I’m always amazed more people don’t do it. I often get the security thing thrown at me. I understand that, but ask the people that worked at Enron, Arthur Anderson or who know work at any large corporation that is going through restructuring how secure they feel? Security is a myth, there’s no such thing in life. Everybody reading this will be dead in under 100 years, how secure is that?

Rate how happy you are with what you do out of 100 (100 being the best, 0 being devastatingly awful) on an average day.
90. I think it may even be higher than that, but the one thing that stops it nudging 100 is the fact that I want to do more public speaking and that is something I’m only just starting to get in to.

Would you call yourself a workaholic, & if so, are you alright with that? Do you think that’s normal for your industry?
LMAO – A workaholic life coach, that wouldn’t look very good, would it? Nah, not at all. I used to be a bit like that, but now I have lots of disengaged time. The only problem I have is that so much of what I do doesn’t feel like work that sometimes my hours can creep up on me. I have a wife though that is always happy to tell me when that happens by smashing my Mac with a hammer and punching me squarely in the face.

What would your number one suggestion be for someone who wants to do what you do?
Do it because you’d love to do it and not because you have had a few friends tell you you’d be good at it. Coaching professionally is not like having a chat over a cocktail with your best friend. Also, 80% of coaches earn less than $20k so probably don’t get into it because you see Tony Robbins and think you’d like a $50k smile, again you have to love it.

…How about number two?
Leave your ego at the door. It’s not your job to force your opinions, beliefs and values on somebody else. Learn what makes them tick and step into their world, don’t try and drag them into yours. Too many coaches set off with the belief that they know best for the client based on what is best for themselves.

What do you wish you had known when you first started out?
That’s a tough one and I honestly can’t think of that much. Maybe that it’s ok to turn clients away. There’s stuff I’m glad I didn’t know. If I’d known it would take me 2 years from moving to the US from the UK to actually making money I may have thought twice, so I’m really glad I was living in blissful ignorance as to how hard it would be. Having said that, I made some fundamental mistakes like not working on my marketing and sales because I thought I knew it all.

Are there any major misconceptions about your job or industry?
That coaching is serious business and coaches stand around stroking their chins and pondering the meaning of life in between hugging whales, knitting their own yoghurt and stroking trees. I guess some do, but I like to have a laugh and anyway, according to Douglas Adams the meaning of life is 42 and I have no reason to doubt him.

What motivates you to keep doing what you’re doing?
Client feedback. The biggest buzz I get is either a client testimonial or a client saying something along the lines of “Wow, I never thought of it that way”. That can send me on a bit of an ego trip the like of which Eckhart Tolle couldn’t drag me back from for an hour or two 😉 Also, I have a goal to sell 1 million books and I’m only about 999,000 short.

Who do you look up to within your industry & why?
Tony Robbins because not only is he 6’7″ but he rebranded NLP and took it to the masses. You seldom hear him speak of it, but that’s what he’s using a lot of the time. I know he’s looked down on by a lot of professional coaches because of his high profile showbizzy type approach, but he’s helped a great many people and that’s what coaching is all about. Wayne Dyer and Deepak Chopra are also personal favorites of mine as they take a spiritual route without forcing any one religion on people, they are the antithesis of fundamentalism. Within NLP, Richard Bandler is a genius in the true sense of the word. He can appear mad as a very mad hatter at times, but his ability to do rapid change work with clients is stunning and probably as good as anybody on the planet. The same goes for his NLP co-developer John Grinder in a much more understated way. As a showman, Derren Brown is the best. if you don’t know of him check him out on YouTube and go and buy his DVDs. I usually watch NLP/Hypnotist types and think “Yeh, now he’s anchoring and now he’s using a break state or working with submodalities etc” With Derren Brown I’m thinking “Was that an anchor he just set, now what the fuck’s he doing, he’s lost me” Can I say that??